Periodically, over the years, people bring up questions about the case of David Milgaard, a controversial criminal case during the time that I was Minister of Justice and Attorney General of Canada.  Someone wrote to me about it recently, and so now that I have this blog site, I thought I would clarify a few misconceptions that seem to persist.

For those of you that might not be familiar, here is a timeline of the case compiled by CBC: http://www.cbc.ca/news/background/milgaard/

There are two errors in that timeline.

First, the CBC lists the date Feb. 27, 1991 as “Campbell turns down Milgaard’s request to review his case.” Not only did I not turn down a review of the Milgaard case. I reviewed David Milgaard’s case… twice. After the first review, which was very lengthy and detailed, I turned down his application to declare a miscarriage of justice, pursuant to Section 690 of the Criminal Code of Canada.

Second, I never said that it would prejudice Mr. Milgaard’s case if I looked at a new forensic report. On the contrary, my only concern was that when Mrs. Milgaard “ambushed” me in front of TV cameras in Winnipeg when I was preparing to give a speech on a constitutional reform issue, her efforts gave a “political” cast to the issue when there was nothing “political” about it from my perspective. Anything the Milgaards or their lawyers wanted to include in their application for a declaration of a miscarriage of justice was reviewed carefully in the course of dealing with the application.

After a second application was filed by Mr. Milgaard, based on new evidence, I used a rarely used power of the government and asked the Supreme Court of Canada to give me an opinion on whether, in its view, a miscarriage of justice had occurred. 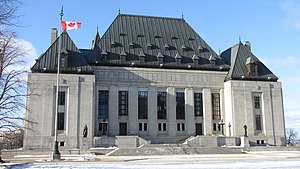 In asking the Supreme Court to advise me, I knew this would be the only chance to make public the evidence in the case. I was not free to do so. The five judges on the panel not only had the extensive briefing material that I consulted during my first review and anny additional evidence added by the Milgaards, but they were also able to call all the witnesses in the case to give evidence in open court, a procedure that was not available to me. After three weeks of such testimony, their opinion to me said that “there was ample evidence to convict Milgaard”. However, they concluded that had the jury known of the presence of a similar offender (Larry Fisher) in the neighbourhood at the time this would likely have led the jury to find a reasonable doubt. On that basis, I quashed his conviction and he was set free.

At the time it was not possible to do DNA testing on the tiny bits of semen on the victim’s clothes. Some years after David Milgaard’s release the DNA technology had developed to a level that allowed the tiny fragments to be analyzed and this exculpated David Milgaard and inculpated Larry Fisher. It was the only direct evidence against Fisher and he was convicted of the crime. I was glad that David Milgaard finally had a definitive answer to establish his innocence. The five judges on the panel gave wise advice, which I accepted immediately. I have been very candid about my own doubts, but I was wrong. That is why it was important to create a process that would be fair, thorough and credible. I believe I did that.

I am only sorry that in earlier forensic testing relating to blood type analysis, experts acting on behalf of Milgaard destroyed the larger semen samples, rendering them unusable for DNA testing. If that had not been the case, we would have had a definitive answer much earlier. But this was no one’s fault. DNA testing was in its earliest days then. Happily, it is much more accessible and advanced now.

This case was never about me or my personal views. Like the judges of the Supreme Court, I did not see evidence of fault with the trial. But their advice was wise because the law is not about certainty of innocence- it is about “reasonable doubt” of guilt. And for good reason. Human beings are fallible and a criminal conviction should be based on evidence that is persuasive beyond a reasonable doubt. The jury in the Milgaard case did not have access to information about Larry Fisher. This case shows why “beyond a reasonable doubt” is such an important standard.

Among the lessons that I took from the Milgaard case, even before DNA testing exculpated David Milgaard, was that the process for applications under (then) Section 690 of the Criminal Code of Canada, also called the Royal Prerogative of Mercy, was flawed. I instructed the Ministry of Justice to develop a process to review the law and practice under Section  690 and we engaged lawyer James O’Reilly to do a thorough review of the process and make recommendations for making it fairer and more transparent.

In 1993 I received a Christmas card from Mrs. Milgaard thanking me for my efforts. She had said at one point that she should not have “ambushed” me in Winnipeg in front of TV cameras, but I understand her desperation. I wanted to avoid making a political football out of her son’s case because, in my view, my duty under Section 690 of the Criminal Code to determine whether a miscarriage of justice had taken place was in no way “political”.

Since those days there has been a great deal of research on cognitive psychology and its bearing on criminal justice. The unreliability of eye-witness testimony and even of “confessions” has made the contribution of forensic evidence more important than ever.

So, for the record, I did review David Milgaard’s case and ordered him released. I could not, however, give him back the years he spent in jail, and that makes me sad. That is why I continue to engage in activities supporting the rule of law and fair justice systems.

5 Responses to “Setting the Record Straight”